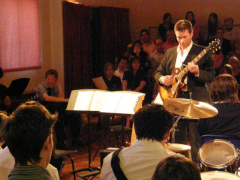 Andrew Keeping has been teaching the guitar since 1990. He teaches all styles of guitar from Classical, Jazz, Electric and Acoustic. Many of his students have entered the profession as recitalists, teachers, bands members, and as session musicians and recording artists.

He gives regular lecture/recitals and Masterclasses, and has worked at Melbourne University (Australia), Columbia University (New York), Harrow & Eton Schools and at Festivals, schools and institutions throughout Europe and the UK.

Andrew has been a resident guitar teacher at Orley Farm Preparatory School (1990-2001), Merchant Taylors' School for Boys (1991-2001), Haberdashers' Aske's School for Girls (1991-2001), Tunbridge Wells Grammar School for Boys (2009-2013), Bethany School (2001-2014), Invicta Grammar School for Girls (2014-2017), and currently runs the guitar departments at Sutton Valence Independent School, Sutton Valence Prep School and , in his home county of Kent. He is frequenty invited, as a consultant, to support music teaching in the classroom at state schools throughout London and the South East. He is also professor & visiting lecturer at the London College of Music/ University of West London.

The guitar and band workshops that Andrew runs, aim to bring together enthusiasm, technique and team spirit. They often culminate with the group creating their own compositions to perform in front of an audience.Since he and his wife became foster carers in 2004, Andrew has further developed his versatility and aptitude in working with children; including those that have learning disabilities, emotional, behavioral, and communication difficulties. Music has played an invaluable role in providing a positive and life affirming experience.

Andrew runs Corporate Events, giving motivational and team bonding seminars involving a fun and creative group music exercise. In addition to his work as a performer and teacher, Andrew also works as an adjudicator for festivals and competitions. Over the years he has kept his finger on the pulse of music in the UK, by sitting on various international music committees . He recently finished his 3 year term on the Performers and Composers section committee for the Incorporated Society of Musicians, and now continues his involvement on the Performers and Composers Special Interest Groups. 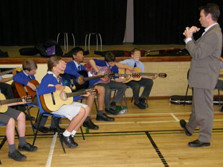 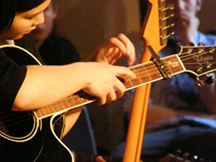 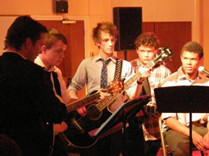 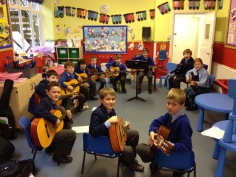 Andrew customises his musical arrangements to suit any group. 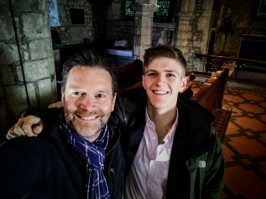 Many of Andrew's past students and gone on to forge their own careers in the music industry. Many don't, but still just love playing their guitar! 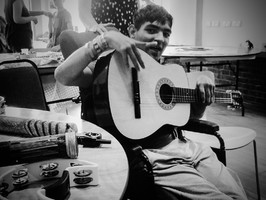 Andrew runs workshops with children and adults with learning and physical disabilities. 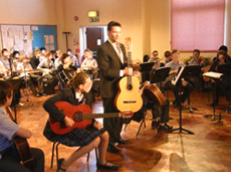 "On behalf of myself and all the Members of the Pengelly Society thank you for a fantastic evening...your performances were 'jaw dropping', and for many it was probably the first time they had listened to live classical music at close quarters...

You have a great gift at engaging an audience and the feedback was universally positive. You will probably have guessed this anyway, by the number who gathered round for a long time during refreshments. An excellent evening!" 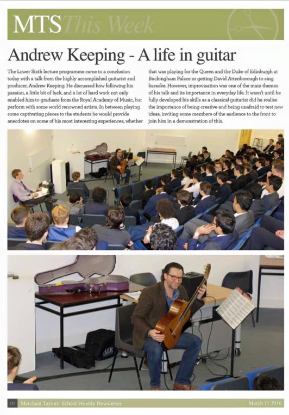 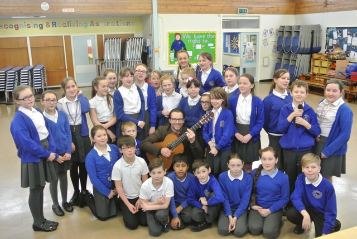 Inspirational talks and assemblies for schools. Andrew often uses a message with a motivational moral when talking to school groups.  The idea of inspiring young people to achieve their goals is often the driving force of any talk.

An example of Andrew's work.

" A genius with the classic guitar."
(Western Telegraph.)

" He has done more than most to promote British solo guitar."
(London Evening Standard.)

Classical Music on the Web.

" further evidence of his status as an artist of taste and skill."
(Musical Opinion.)

If you have any queries or wish to book Andrew for a concert or event please contact him:

Get social with Andrew.